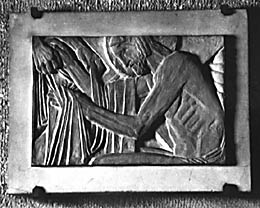 Bouchard only used a cement (powdered stone mix) for low relief works and in particular for the stations of the Cross, to be found in the church of "Lestrem" in the Pas de Calais (1928) and in Paris in the church of Saint Pierre de Chaillot (1938).

The technique is simple as the artificial stone work is created through casting. It remains faithful to the original model and proves to be much less costly than stone. 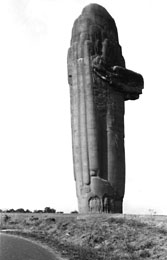 Bouchard used reinforced concrete only once for the large monument at Mondement, commemorating the first victory of the Marne. A massive monolithic structure, 33 meters in height, that marks the spot where the invader was stopped in September 1914.
The architect Paul Bigot conceived this landmark in the form of an immense menhir or standing stone within the upper third part of which a concrete low relief was embedded, about 11 meters long, which carried a great horizontal emblem of Victory. 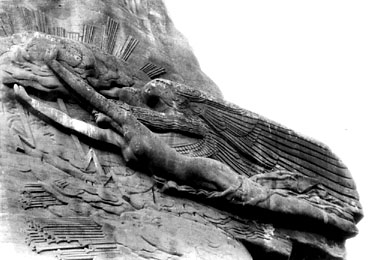 Bouchard modelled this "Victory" in clay, at one-third the scale of the cast model, on the nail-spiked panel in his studio. The finishing was done by cutting into the concrete. 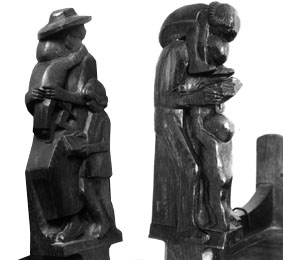 Bouchard carved wood for a short time upon his return from the war of 1914-18. We know of only three examples in the round; two carved directly from blocks, the other was carved using the pointing machine technique, after a modelled motif.

Other examples are decorations applied to furniture, occasionally done by direct hand-carving , for himself or in the apartments of his friends.

Sculptured posts of a sideboard (1919).
Bouchard's woodcarving period was short-lived. This kind of work of hand carving was too long for a sculptor like him who had many ideas for subjects to be transformed three-dimensionally.

Sculpted details of a dining-room shelf: The children's afternoon tea (1919). 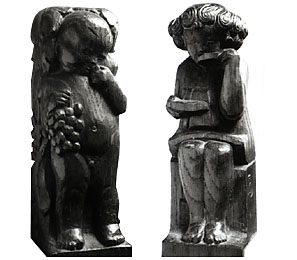 Very few works were realised in this material.
Bouchard was very wary of the shrinkage in clay caused by firing or baking. At the kiln's higher temperatures clay will shrink by about 10%, so the walls of the cast model to be fired must have precisely the same thickness all over. 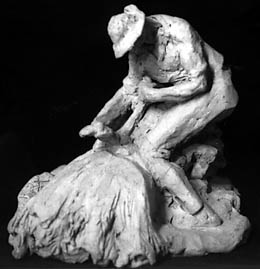 Shrinkage is more pronounced in the thicker rather than thinner areas, so an extremely rigorous technique is necessary in order to avoid distortions.
For editions, only the impression technique can give correct results.

The hay-cock maker (1899), Terracotta
Bouchard also entrusted, in the majority of cases, his models to the Manufacture National de Sevres, where 9 different models were realised between 1928 and 1936, or to the earthenware factory of Henriot in Quimper where 4 models were produced at the same period. 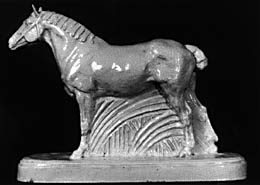 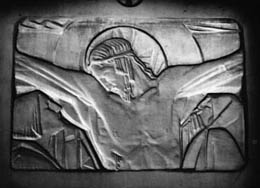 A single example is known among the works of Bouchard: the Road to Calvary of which all the Stations of the Cross were poured in glass paste by René Lalique in 1930 and inserted into the side walls of the church of Sauchy-Lestrée, that was constructed by architect Léon Tissier, in the Pas de Calais.

Bouchard expressed diverse subjects through the process of medallion casting :
portraits (often in profile), all kinds of scenes of a spontaneous nature or on the occasion of a commemoration, thereby giving a certain importance to the inscriptions.

He modelled his medallions in plasticine, which is very fine, malleable and does not harden. He applied this material to a small nail-spiked panel, supported on a painter's easel, in the shape of a disk of about 20-30 cm in diameter.
Once the modelling was finished the remaining model he cast himself in plaster. The plaster-cast was entrusted to an artisan who dealt with the reduction and production in examples of 6, 8 or 10cm in diameter.

If the medallion was to be a limited edition, he entrusted its reduction in plaster to the metal casters Koller or Thinot who would cast in bronze the few examples ordered, using the sandbox-casting technique.

If the order was for a large number of examples, he entrusted the master-cast in plaster to the various medallion stamping houses : Janvier and Berchot, Arthus Bertrand or the Monnaie de Paris.
An initial model produced by galvanoplasty allowed for the creation of a model in its definitive size, through reduction and engraving, in a steel matrix.
This process allowed for the stamping of a lead-disk model that was submitted to Bouchard for approval. After the sculptor's acceptance of this "good for impression" example, the technique of applied stamping enabled large-scale production of examples in bronze.